Last week, I had the honor of speaking to 100 burn survivors at the annual World Burn Congress.

Many of the survivors have horrific stories, their severe burn injuries caused by everything from war and plane crashes to house fires and domestic abuse. They have a story to tell and want to tell it, and I was there to teach them how to best write and deliver a compelling speech.

But since many of the burn survivors are disfigured – many with distorted facial features and others with missing arms, hands, and fingers – they have an additional challenge when speaking to general audiences. Two interesting questions came up during the training – one from the audience, and one from me:

1. How Can I Put The Audience At Ease?

Several burn survivors were curious how to best put the audience at ease, given that their appearance may make the audience uneasy.

First, like any speaker, the burn survivors should demonstrate a comfort in their own skin. An easygoing persona transfers comfort to the audience.

Second, it helps to get the elephant out of the room quickly. Early in their speech, the burn survivor should let the audience know that all topics related to the burn are okay to ask about – until the audience feels safe, it will remain somewhat closed off to the speaker’s message.

Finally, many of the survivors said they used humor to put their audiences at ease. One person said he begins his speeches to children by saying, “I know I look funny, but it’s okay. I stopped burning years ago.” That may not work for all speakers, but those who can pull it off well disarm their audiences with a single quip. 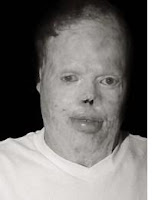 2. How Should I Talk About Non-Verbal Communication?

Any public speaking coach discusses the importance of the non-verbal elements, such as eye contact, gestures, and posture. But how should I talk about those elements to burn survivors, some of whom are visually impaired, missing limbs, and wheelchair-bound? Would it be insensitive to dispense such advice?

I asked that question of a few attendees before my speech, all of whom advised me to say what I would normally say. They told me they would modify my advice based on their own limitations, but wanted to know what the best practices for public speaking were.

They were kind enough to answer my invasive questions, one of which was whether an audience member might be distracted by a speaker gesturing his arm with a missing hand? Maybe, they said, at least at first. But if the speaker remembered to put the audience at ease early in the speech, they said, it would be fine.

There’s no doubt that a burn survivor has a more difficult task as a public speaker. But those challenges are also opportunities. Their stories are emotional to hear – and when told well, they can easily move an audience from inaction to action.

In many ways, they’re no different than the rest of us. Like every other speaker, they really only have to remember one thing: if they put the needs of their audience first, they have a great chance of speaking success.
Disclosure: Phillips Media Relations is a sponsor of the World Burn Congress.